Things to do in March

March marks the official beginning of Autumn in Australia, and Sydney makes the transition from summer smoothly as the cooler-yet-still warm conditions combine with generally sunny skies to make it one of the best months of the year for visitors to travel to Sydney.

Coupled with the fact that the city is generally less busy than the summer holiday months, and the benefits to travellers should be clear. Unlike many other countries where Autumn marks a major period of natural visual change, many of the trees in Australia are evergreen, meaning that the yellows and reds that many associate with the season are not as prominent here.

The obvious - and wonderful - exception to this rule that is definitely worth a visit in Sydney in March are the city's famous Royal Botanic Gardens. This extremely well-maintained facility offers a cavalcade of natural floral beauty, with a huge number of plant and tree species from around the world that truly shines at certain times of the year and Autumn - second only to Spring in terms of visual splendour - is one of the best times to take a stroll. 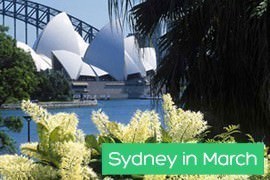 While there are no major public holidays in Sydney in March, the annual festivities of St. Patrick's Day are always a lively event and - despite the lack of any major affiliation with Ireland - the colour of green can often be seen spread throughout the city, and a yearly parade is held as people line the streets dressed in their St. Paddy's best on 17 March. In terms of temperature, March is still relatively hot as the summer transition is still in effect, with average maximums of a warm 24.7 degrees and nightly minimums of 17.6 degrees being the norm - meaning that the range of activities and things to do on offer is about as wide as it can get throughout any other time of year.

Some of the best and most popular things to do in Sydney in March include: 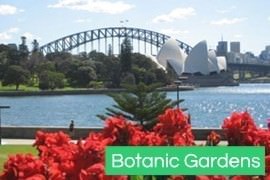 As previously mentioned, the Botanic Gardens are a true highlight and one of the "must-do's" for any visitor to Sydney, and Autumn is a season that brings out the best in the many deciduous plants and trees that populate its gardens.

One of the best ways to simply enjoy nature while within the centre of Australia's largest city, the Botanic Gardens will let you absorb amazing views of Sydney Harbour while walking through the immaculately-maintained greenery to view the endless range of plants, trees and more that are often filled with birdlife such as cockatoos and other native birds, further adding to the charm. Regardless if you have only a passing interest in all things floral, the Gardens are definitely one of Sydney's highlights in March and can be easily accessed by either train, ferry or bus.

Once March rolls around, the humidity levels of summer have typically dropped below previously uncomfortable levels and the evenings are a mild temperature that makes being outdoors particularly pleasant.

Sydney Harbour is the city's main highlight during any month, so these temperature conditions are ideal for experiencing at night; numerous dinner cruises are available that will not only let you experience this jewel of a waterway and its different character that the night lights provide, but also a delicious meal aboard with a choice of delicious dining and drinking options as you sit back and admire all the landmarks that make Sydney Harbour a world-famous icon. Truly a magical evening to commemorate a special occasion! 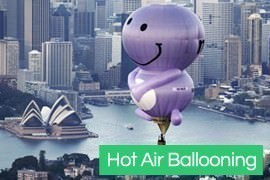 The early morning departure times that go along with hot air ballooning make leaving in the "extreme" seasons - meaning, winter or summer - far less comfortable than is ideal. March, being a transitional month that bridges the end of summer to the beginning of autumn, provides comfortable conditions that are neither too cold or too humid when awaking at such an early time of day, and floating up to the skies in a hot air balloon above Sydney make this the ideal time to do so.

Clear skies are a staple part of March in Sydney (which has one of the lowest rainfall amounts of any month of the year), which provides another benefit and allows for completely uninhibited views of the iconic Sydney skyline, the glittering ocean, and the spectacular Blue Mountains. Lastly, there are few better ways to celebrate Valentine's Day in Sydney than with the relaxation and romance that a hot air ballooning adventure provides.